And arriving to watch the ball drop in Times Square

Open at 54 Below tomorrow for a 3 night residency with Tracy Stark on piano and Mike Lunoe on percussion. Still a few tickets if you get cracking fast - 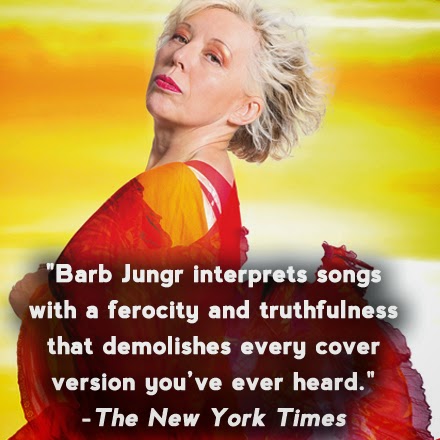 Eleven songs by Bob Dylan and Leonard Cohen may be a little much, right? Not when this British cabaret singer gets through with the poignant, often seminal, soundtracks that once represented an entire generation of protest during times of struggle. Jungr handles the protest (“Blowin’ In The Wind,” “It’s Alright Ma,” “Who By Fire,” “First We Take Manhattan”) gracefully, adding her feminine touch and infinite compassion in vocals that never stray into hysteria or strident homily. She makes the listener feel the emotional ramifications of the social injustices, and keeps those themes relevant today. “I knew right from the start it was all the tougher songs of Bob Dylan and Leonard Cohen that I wanted to sing. I knew there was somehow a through thread to them — that the world they described and the actions they rejected and celebrated were of as much importance today as the day those songs were penned. There’s something in both writers that transcends the material itself, as though the words and music have powers beyond the paper and the groove, beyond the voice and the piano.” Right on.

Its been a fabulous past year but now its time to turn up the cruise control to warp factor 5. Look out 2015. Here we come.

And I wish a very Happy New Year to all my family, friends and acquaintances around the world - I wish for us all this year to be in the places we love with the people we love in the best ways possible…..

WORKSHOP and TUITION ALERT NEW YORK CITY - I forgot to add this via Tracy Stark - The amazing Barb Jungr is returning to NYC this week!
There are numerous ways to connect with her. 1. She will be performing at 54 Below, this weekend! Fri-Sun, Jan 2,3 & 4th.2. If you'd like a private lesson, Barb and I will be teaching private hour sessions, on Sat, Jan 10th.
For more information, and to secure a spot, message me here on Facebook, or email me at Tracy@TracyStark.com
3. Or, if you prefer a double whammy, Barb and Lennie Watts will be teaching a masterclass on Sat, Jan 17th
Contact Lennie at:
lenniewatts@gmail.com

International Recording Artist and Master Song Stylist Barb Jungr crosses the pond and joins forces with Multi Award Winning Director Lennie Watts for this one day special Master Class! In this workshop, the focus will be on the uniqueness of each performer, and the best way to support that with technique and imagination. Special attention will be given to bringing out the story in each song and making that story specifically yours.

To reserve a spot or if you have questions. Contact Lennie Watts at lenniewatts@gmail.com

BARB JUNGR is an award winning renowned UK based song stylist and performer who's 30 year career has taken her all over the world. She has done seasons in the major residencies in the UK, US and Australia and has garnered rave reviews everywhere. She has since 2000 released 7 acclaimed CDs on Linn records and 2 on Naim Jazz.
www.barbjungr.com
https://www.facebook.com/OfficialBarbJungr?v=wall&ref=ts