Last week saw the first performance of the Peggy Lee James Gavin show at the Lincoln Centre, featuring jazz legend Rebecca Parris, the glorious Nellie McKay, handsome crooner Spencer Day, lovely Jane Monheit and myself, accompanied by the extraordinary Mike Renzi on piano, Jay Leonhart on bass, Craig Haynes on drums and of course James Gavin who wrote the Peggy Lee definitive biography "Is That All There Is? The Strange Life of Peggy Lee". More about the book, here

We had rehearsals the night before the show with Mike, who had played with Peggy many times, and is widely regarded as one of the best jazz accompanists - currently he works with Tony Bennett, I rest my case. Then all day thursday was rehearsals and sound check at the marvellous Appel Room at Lincoln Centre in Manhattan. We were, I think, all quite nervous-in-a-good-way about the show, especially those of us who had new or tricky songs. It was a fabulous night though, and friends came and shared it with us, and we made new friends and gave Peggy our personal tributes - all of us in our own ways - no one did a copycat or even tried to do that. And James Gavin had done the most wonderful job of firstly conceiving the piece and then making it happen from his mind to the stage. His talk between the songs was splendid and managed the tricky job of being informative and also witty and smart. Here are a bunch of photos from the evening.

Behind the stage is Manhattan at night, the full length windows give onto the edge of Central Park. Its a buzz and a half having that behind you. 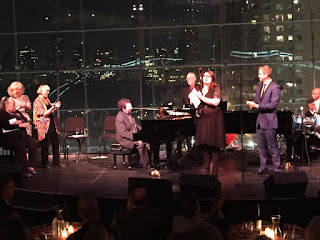 Here's me doing my thing.


We had a lovely hang out after the show with friends and the band.

Managed to leave New York just before the storm hit and the flights started to be  cancelled and got back to two lovely reviews for the new album, one in Kind of Jazz and one in Boycotting trends, both here. Thank you Matthew Ruddick for this

and Alex Ramon for this

The Kate released a very short promo video of the live recording they made which will go out nationally on PBS North America in a few weeks, here -


And there are more videos of 2 short clips of us playing live at the Yamaha showcase in Manhattan with Laurence Hobgood on piano, Wilson Torres on percussion and Matt Clohesy on bass, on the BarbJungrsings Youtube channel, here

You can pre-order the album from iTunes and Amazon UK, it comes out on feb 19 in the UK and in April in the States.

The UK tour dates are all on the website here 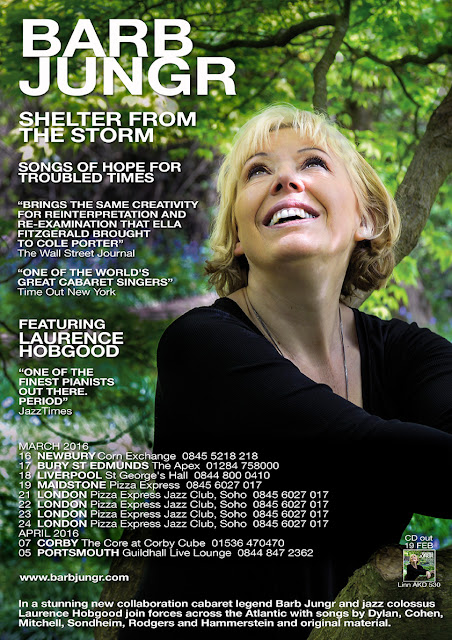 US tour dates will start in May and will be on the website soon, there are 4 nights at Joe's Pub in NYC.

Meanwhile I'm at County Antrim, Northern Ireland on Friday 29th and Saturday 30th January performing Hard Rain with Simon Wallace  on 7th February and 7th February I will be at Crazy Coqs with Davide Mantovani on bass and the wonderful Simon Wallace on piano. All details are at the website link above.

Hope to see you at one of these!

Come Together in New York, frozen weather and fab showcases this weekend!

January in New York can be brutal weather wise and this year is no exception. Of course all my friends and fans in Russia and Canada and indeed the northern US States will be laughing their sides sore when I say this, but I find minus 4 with a wind that tries to eat your bones as you walk down the street, pretty challenging. As always one has to wear ALL ones clothes at the same time and take them off whenever one's inside again. So there's a lot of extra exercise involved in doing that. I am wearing 2 scarves when I go out and a hooded coat. Like a warm ne'er do well.


Its way too cold to run in Central Park and when I walked there the very few people I did see running  and honestly they looked as though they were in imminent danger of rapid demise, its not recommended.  One had shorts on. And he was, kindly put, not young. I thought "oh go indoors sweetie and have a cup of tea". Even the park itself looks frozen.


So off we, (John Mcdaniel and I) toddled to do our show at Feinstein's 54 Below. On a night when it was brutally cold, we still had a fabulous audience and a great time singing and playing, and they were a delight and afterwards a lot of folks all hung out together in the bar and chatted. So I was thrilled to find a terrific New York Times review of the show afterwards.

With this fab photo of us on stage by Michelle V. Agins.

And now its off to rehears Shelter From The Storm for the weekend of showcases in New York, which for Laurence Hobgood and I means Yamaha tomorrow and the Hilton on Sunday.

Happy New Year, to one and all,

as the Christmas decorations are stashed away for another year, (personally for me they're over by the end of January 1st), and the family return to their corners of the world, work starts up again gearing into what I believe will be a fine year.

I began mine singing yesterday night at the fabulous Crazy Coqs in Central London with Jenny Carr on piano and Dudley Phillips on double bass. We played the Man In The Long Black Coat Dylan show, which I hadn't sung for a while. It was a joy to return to those songs, in that set. And it set the tone for the year.

On February 19th Linn Records release the new album, Shelter from the Storm, subtitled Songs of Hope for Troubled Times. Its a collaboration between the wonderful contemporary pianist Laurence Hobgood and myself and we recorded it last year in New York at Sear Sound, with Michael Olatuja on double bass and Wilson Torres on percussion. The first ever live performance of it will appear on national US TV on the PBS channels in late spring.

Watch a segment of the Kate film, here,

Steve Ullathorne took the photographs for the new album,

Its available for pre-order here, from Amazon

There will be a tour announced shortly to accompany the release beginning in late March with dates at Newbury Corn Exchange, Liverpool St George's Hall, The Apex Bury St Edmunds, The Core at Corby, Portsmouth Guildhall, and 4 nights at Pizza Express Dean Street Jazz Club.

The new website design is happening as I write, so its a big spring coming.

You can keep track of it all by liking the official FaceBook page which has all show details and news all the time, here

Alongside that there are great plans for the Deep Roots Tall Trees Corby project, and a new piece of children for Polka Theatre, which will open in the autumn. The Little Angel Production of Bear Hunt will run in spring in London and tour again in the autumn.

And there are tour dates in the USA and more outside UK plans, to be announced.

I very much look forward to seeing you at some of these shows, and hope for a peaceful and beautiful New Year for everyone, everywhere.