Well, we're 4 shows into the 16 show run, so thats a quarter done, and its a total roller coaster. Audiences are amazing - cheering and stamping and standing, and loving these tricksy, crazed songs.  Tracy Stark is playing like a demon and Mike Lunoe is stirring the percussion into a frenzy.

Here are some highlights.

Photos from the first night here -

And all the above are by and on Barry Gordin's Theater Life website piece, here -

with a 5 star review of the show by Paulanne Simmons, here

Dylan, Cohen... and Jungr
By: Paulanne Simmons
British chanteuse Barb Jungr turned 60 this year. And she's "had enough of love songs." Instead, her new show, Hard Rain: The Songs of Bob Dylan and Leonard Cohen, is filled with the two singer/songwriters' political and philosophical work. And so, Jungr advised her audience at 59E59 Theaters they would be listening to songs with the most words in one evening. A set list with the likes of Dylan's "It's All Right Ma (I'm Only Bleeding)," "Chimes of Freedom" and "Masters of War," or Cohen's "First We Take Manhattan," "Everybody Knows" and "1000 Kisses Deep" would in itself be worthy of note, but Jungr gives each song a lyricism and subtlety that turns every expectation on its head.
Jungr slows down rock and gives folk a jazzy twist. Every once in a while she delivers a line with a wry smile or a knowing nod. There are mysterious truths to these songs, and she's letting us in on the secret.
There's also a lot of humor. Although Jungr is meticulous about every note and every line in a lyric, she does not always take herself very seriously. At one point in the show she notes that her near obsession with Bob Dylan might be the result of nothing else to do.
With Tracy Stark at the piano and Mike Lunoe on percussion, the three performers achieve a synthesis of melody, rhythm and mood one does not often hear. It's almost as if Jungr, Stark and Lunoe are in their own dimension and allowing the audience to joi n them for a while.
Although many of Dylan and Cohen's songs are 40 or 50 years old, Jungr believes "their music was so prescient; all of these songscould have been written this morning."
But in Jungr's hands, it is not only Cohen and Dylan's visionary quality that makes their work so relevant. It is also her thoughtful reworking and emotional investment that breathes new life into smoldering embers. 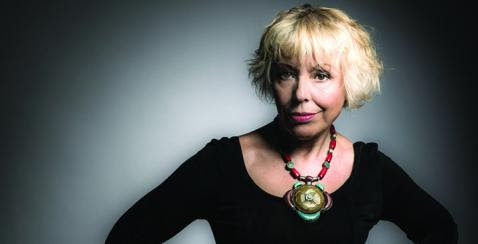 And it was wonderful to see David Kenney again for his wonderful Everything Old is New Again radio show.

There were a burst of first reviews - this in Deadline Hollywood - "And another real thing: 59E59 Theaters is presenting the remarkable chanteuse Barb Jungr in Hard Rain, a thrilling cabaret evening of mostly early songs by Bob Dylan and Leonard Cohen. Ranging from Dylan’s “Chimes Of Freedom” to Cohen’s “Who By Fire,” the pairing is inspired and the performance, in addition to showing off a prodigious memory for lyrics, is flat-out awesome. Jungr is no ice queen; she suffuses each song with engaging physicality along with a gorgeous mezzo, and the show gets better and better as the 70 minutes fly by. “First We Take Manhattan” (Cohen) and “Masters Of War” (Dylan) are among the many knockouts.  Also a must-see."
Jeremy Gerard October 31 2014
And this in On Stage -

“Fear not, I am the first and the last, and the living one. I died, and behold I am alive forevermore, and I have the keys of Death and Hades.” Revelation 1:17b-18

In her challenging and remarkable performance piece “Hard Rain,” currently running at 59E59 Theater B, Barb Jungr alludes to the often cryptic nature of Bob Dylan’s lyrics. There is yet another bit of cryptic poetry from a source often mined by both Bob Dylan and Leonard Cohen; namely, the Bible. It is best not to argue that point. The imagery of both writers is informed by the rich imagery of the sacred books of the Judean-Christian communities. This does not mean that either poet has a faith construct consistent with either faith; it simply means they – like other modern and contemporary authors – allude to this material for its rich imagery and metaphorical treasure trove.

Dylan and Cohen – the troubadours of truth – like the “first and the last" before them – figuratively (and often literally) have entered all those spaces (metaphorically “Death and Hades”) that have always threatened to undo humankind and the planet upon which it treads boards and often finds itself treading water. And they in truly redemptive fashion have shared not only what they saw about the “hard rains that are going to fall” but also the urgency of a meaningful response from humankind. Barb Jungr – like the messenger on Patmos who shared the news that the early Christians could survive the torment and torture of the Roman Empire – assures her audience that though all is not right in “The Land of Plenty,” “The Chimes of Freedom” counterpoint catastrophe. We are able to affirm that we are alive; yet, we need to be aware that the often surreal revelations of Bob Dylan and Leonard Cohen continue to threaten our existence.

Barb Jungr is more than a performer-singer. She is the consummate performance artist, spoken word artist, poet, prophet, Sherpa, interpreter, and spirit-guide. She completely trusts the material she performs – as she completely trusts Bob Dylan and Leonard Cohen. All thirteen songs are remarkable arrangements of both songwriters and Ms. Jungr reimagines each of them with unique styling and phrasing and with a voice laden with raspy gentleness that counterpoints the “three angels above the street” (those who have eyes will see).

Particularly challenging are Bob Dylan’s “It’s Alright Ma (I’m Only Bleeding);” “Hard Rain;” “Blind Willie McTell;” “Chimes of Freedom;” and Ms. Jungr’s encore “Blowin’ in the Wind.” Equally challenging are Leonard Cohen’s “First We Take Manhattan;” Everybody Knows;” and “The Land of Plenty” which perhaps epitomizes the hope of the performance: “And I don’t really know who sent me, /To raise my voice and say:/May the lights in The Land of Plenty/Shine on the truth some day.”

There is no sugar-coating of the mess humanity has repeatedly and successfully made throughout history and the rehearsal of those mistakes and their consequences (most often affecting the 99 percent rather than the privileged one percent) makes for a somewhat “bumpy ride.” But sharing a night with Barb Jungr is a redemptive blessing. Redemption is often “not pretty or fun.” It is, however, all we have to hope for and all we can strive for. In the words of Bob Dylan, “And what'll you do now, my blue-eyed son?/And what'll you do now my darling young one?/I'm a-goin' back out 'fore the rain starts a-fallin.'

and here's the link to Alix Cohen's Woman About Town review with photos by the wonderful Carol Rosegg.

Apart from that I've been resting up and getting yoga in frequently and conversing with the UK on 2015, and enjoying the company of Jane and Luka, here in the East Village; the best hosts.

I've seen the wonderful Sarah Louise Young, and a bunch of friends from the O'Neill. My team at the theatre includes Jonathan Mercado and Emma Wilk and occasionally JP Perreux.

It feels good to have gotten opening night over, and be running now. Its a marathon, this one, weather than a sprint. I'm practically a nun during the rest of the time I'm here because of the show schedule. But what a great place and opportunity and time to be here, with Halloween and the weather changing and winter blowing in.

More on the run after the weekend's 4 shows. Till then med amis,

namaste and peace to you all,

apple of my heart.